Flight in and Shanghai
Well, I made it to China with no missed connections, which had been a major source of stress for the past month or so. However, I did not see the other person from our group that I had expected to be on the same flight. The flight in Portland was delayed an hour but my layover in San Francisco was plenty long to make up for it. I wandered around and bought some Imodium for an extortionate price.  They know you are trapped when you are in the airport and frankly the prices go up after security because they know it is a pain to go back out again. I went through security three times.
I wish airports had a yoga room or someplace to stretch and get your legs up over your heart between long plane rides. As it was I tried to stretch near the gate without attracting too much attention to myself.
I had a bad moment when the in flight display enroute to Hong Kong said the flight would last 16 hours. That would have put me getting in after my connection to Shanghai left, but more importantly I would have gone stir crazy and possibly wrecked the plane by that point. As it was we had a very nice flight at about 12.5 hours. This was the first leg with a Chinese airline. The flight attendant spoke good English but when I asked for a screwdriver to drink she said “I’m thinking I am screwed.”
The in-flight entertainment was fine, but I think I played bejeweled too much because the flashing lights caused a blood vessel in my eye to burst.
At the Hong Kong airport they had all sorts of Chinese patent medicines and every possible liniment for sore muscles instead of the aspirin etc they sell at such stands in the states. I thought it was awesome but overpriced. I finally got on the plane to Shanghai where they offered me my second dinner in three hours. I passed on everything but the red wine and coffee ice cream. Customs didn’t inspect my stuff at all and the baggage claim was shockingly fast but hard to find. I couldn’t read any of the signs so I followed people whom I recognized from my flight.
I was relieved to find our group leader and Chinese Liaison, Dr. Wang, waiting for me with a bus. It was midnight, China time and the other student from our group had missed his connection in San Francisco due to the fog there, turning his journey into a 40+ hour monstrosity. We took the bus back to the hotel in Shanghai, which was a nice place but has the most confusing light setup I had ever seen. By the time I got to my room it was about 2am and I unlocked the door and groped for the light. After about 15 minutes of bumbling about in the dark I finally figured out that you have to insert your key card in the light and leave it there, then push the correct combination of other buttons. Some are for the fan, some the bathroom, one the TV and one the room light. There were several banks of the suckers and when I finally fell into bed I felt like I had really accomplished something with my day. 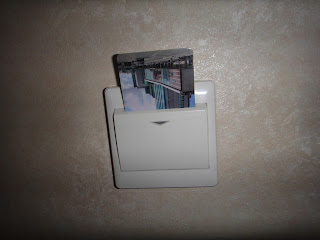 Key in the light? 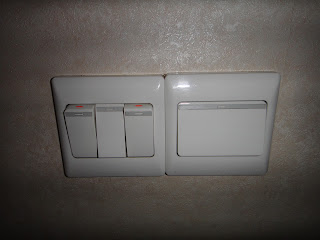 So Confusing!
Shanghai to Nanjing
I woke to a beautiful view of the bridge and river across from my room at the hotel. I then went downstairs for the continental breakfast, which made it abundantly clear that I was now in fact on a different continent. It was delicious, but I wasn’t entirely sure what some of it was. There seemed to be a lot of very salty pickled veggies and some good dumpling type things (Bao Zi?) as well as a sweet porridge and a millet porridge I liked. 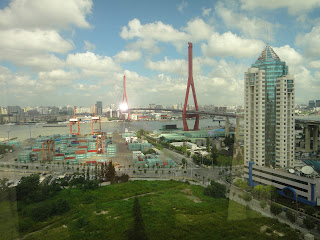 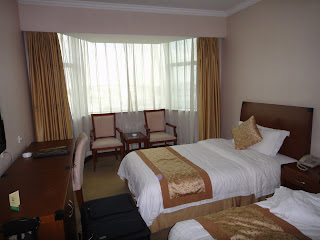 Almost the entire group was at breakfast except for my poor companion still on the plane. Some of the others were full of interesting stories about seeing a monkey drinking coke in Hong Kong and a massage place in the hotel. After breakfast we found that the massage place was closed and I noticed that the ‘elevator with a double window” I had seen the night before was really an elevator with a mirror in it. Also, the “park” across from the hotel was just an overgrown green triangle of land. The flora even in town was quite beautiful though, reminding me of California quite a bit. There was a river flowing through town and a school with students in identical track suits sitting on some gym equipment near a track.

The traffic was crazy of course, a mix of bicycles, scooters and cars all packed together. Traffic laws in China seem to be more of a suggestion than a rule. If you want to ride or drive on the wrong side of the street or go without a light it seems that no one will stop you. The honking is constant. There does seem to be a lane that is mostly bikes, scooters and pedestrians almost everywhere. It is divided from traffic but apparently cars or taxis can go in it if they want to.

We spent a lot of time at various herbal pharmacies pointing at things and trying to figure ou
t what they were in English. My favorite find was a manikin that looked like it had been to the crash test dummy hospital. Apparently they sell a brace for just about every part of the body. 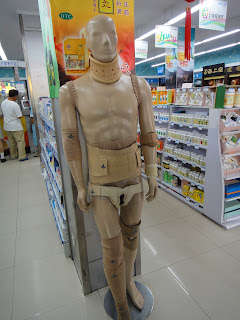 Eventually we all bought water and loaded our luggage on the bus for Nanjing after meeting up with our last member to arrive. We saw the Shanghai World Financial Center, the 3rd tallest building in the world, some factories, a brief glance of Suzhou and some nasty bathrooms on our way to Nanjing. Many of the toilets here are holes in the ground (they do flush) that require you to bring your own tissue. Eventually we reached Nanjing and checked into our hotel, which is quite nice. 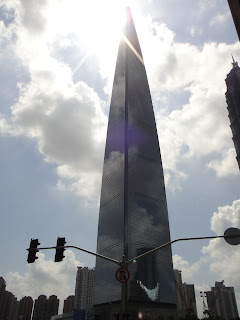 3rd Tallest Building in the World!
My room has a view, a shower that mostly works, a teapot that was fine once I scrubbed it out with iron wool, a comfortable bed, a fridge and a TV. The only thing not up to American standards besides my tea kettle is the carpet. There are no non-smoking rooms in China, so there are cigarette burns and a floor in China is never walked on barefoot or sat on. My room doesn’t smell like smoke though and has a live plant and some fancy plate decorating the alcove above my fridge so I am happy with it. My only complaint was that the internet connection did not work at first. By the time we settled in we were all starving and walked to a restaurant decorated with pictures of Chairman Mao doing all sorts of wise and remarkable things. The décor was dated and no one referred to anyone else as “comrade” as far as I could tell, so I think that was just their thing. The food was good but so spicy that I was drinking other people’s beers and anything else I could get my hands on to try to put out the fire in my mouth until the rice arrived. I went to bed excited for my first day of clinic the next day.