Day 5: Friday September 25, 2010    Chicken Feet Make You Pretty
This morning I didn’t have my regular shift again because of the holiday week, so I biked to a new hospital for an herbal medicine shift instead. I didn’t know where we were going, so I was following another member of our group, or trying to. I was having a really hard time keeping up. At first I thought I was just really out of shape, but then I realized that my tire was flat… very flat. In the crazy traffic and crowded side streets I was pretty sure I would lose her and be lucky to find my way back to the hotel. She was kind enough to wait for me though and we finally made it safely to the hospital’s underground bike storage area. 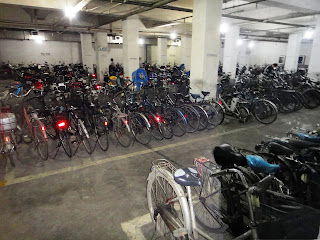 It is impressive how many bikes can fit in a parking garage compared to cars. If everyone drove in Nanjing, the city would be completely impossible to get around in. For all the flak China takes for being a dirty industrial place, Nanjing has the best infrastructure for bikes of any city I have experienced. I hope it will remain such a widely accepted mode of transportation.  In Portland we talk a lot about being a bike friendly city, but in China they don’t talk about it, they just use it. A lot. It’s just more convenient and cost effective for them. Many people in China have an interesting attitude about the environment. There are recycling cans next to every trash can, but they hotel staff laughed at us for buying bikes when we had a car or private bus  available to us. They think we have a weird fetish for “environmentalism”.
The herbal shift turned out to be with a specialist in Pediatrics, Dr. Cai. The first thing you notice about Dr. Cai is his awesome white hat, and the second is his big grin. 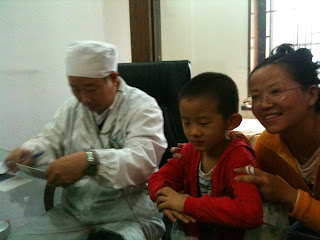 He has a kindly manner that makes him perfect for dealing with little kids. The room was packed most of the time, with kids, parents, other hospital staff and us observers. Because this was an herbal shift, it mostly consisted of writing down the children’s complaints and the doctor’s formula. Dr. Cai was very kind about answering questions, but the number of patients made us hesitant to ask many. In the herbal clinics in China there are no scheduled appointments, you just show up, get a number and wait in the room or the hall until it is your turn. Privacy is not really a concern for most patients.  Half the time if we asked to see a child’s tongue, parents of the other patients who were waiting in the room would lean in there to have a look as well. It was cramped and crazy-making.
Dr Cai had a good rapport with the kids though, who were remarkably quiet and well behaved in most cases. He explained that all children under three have Qi and Blood deficiency, so it is not useful to feel the pulse the way we do for adults. He confirmed that using the vein on the index finger was more useful, as we had already learned in the pediatrics class at OCOM. He explained that he mostly uses his eyes, percussion and auscultation (listening with a stethoscope) to diagnose children. For example, if the coating of the tongue is geographic, i.e. peeled in places, it is the manifestation of an allergic constitution in 50% of children. 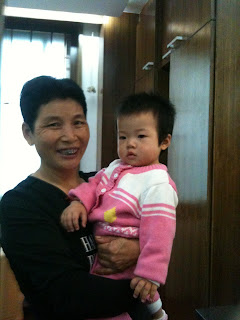 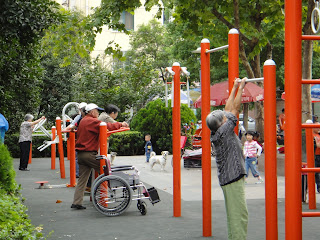 Yup, many parks have free exercise equipment in China, and they are often packed. Other folks were playing Mahjong or cards. There wasn’t too much in the way of green space, but you definitely get the impression that everyone feels safe in the parks and community life thrives there. Some parks also have instructions on how to do exercises for frozen shoulder etc on the equipment. It’s not geared at heavy weight training, but signs say things like “this exercise helps you stay strong enough to pick up your grandchildren or the groceries”.  It’s all free of course, and I wish my patients all had access to places like that in their neighborhoods.  I could tell them to Parkercize! It’s the perfect way to help people stick to a daily exercise routine because it is so social. 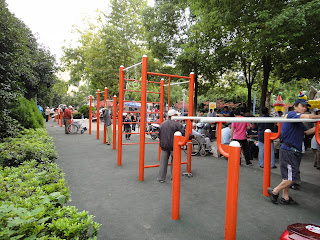 By the time dinner rolled around the group was about ready to try something a little more familiar, so we headed to a place called Club 21 in the expat area. This is where expatriates of other countries have set up restaurants. Club 21 was owned by a man from Europe (several countries it seemed) with crooked yellow teeth. He was like a character out of a book, he literally rubbed his hands together in glee when he saw the whole big group of us descending on his nearly empty restaurant. He then interrogated us about where we were from and whether we were students before announcing that he
was able to give us the fabulous deal listed on the cards he was passing around since we were foreigners and students. The deal was kind of a deal, with free sangria and European fusion style entrees that were not more overpriced than they would have been anywhere else in China. The atmosphere was almost creepy but instead it was hilarious. The seats were hybrids between a bench and a couch, coated in a plush green or purple fabric. There were alcoves with curtains and an empty band stand. The Chinese diners were all kind of seated in back corners, while we were escorted to the big table in the middle of the place. I got the impression that he was trying to use the pictures he has taken of all the foreign guests to create the impression that the place had a cool vibe too it, because there was a slide show of them eating and dancing or listening to live bands on the wall.
At the end of the meal the owner took a picture of all of us and invited us to stay for karaoke or come to poker on Tuesday nights. I have the feeling that we are now also up on the wall. Restaurant review: to make a long story short: the food was decent but nothing special and the creepy manager was trying way too hard.