Today I finally got to sleep in late then had a “white breakfast” as usual. I went to a café with an Italian name “La Pavoni” for lunch.
They are the closest thing to a Portland coffee shop we’ve found yet, and at reasonable prices. The owner even spoke English! Coffee done right is hard to find here but they had Kona coffee and caramel Macchiatos etc. Unfortunately, I had recently had the epiphany that coffee makes me feel weird every time I drink it, so I had hot honey lemon tea. I had spaghetti ala carbonara with real raw egg on it. That is the first food in China that has made every on happy, although their veggie sandwich looked to be more sandwich than veggie. Enough food review. We went back to the Nanjing WWII memorial and saw more very sad statues and exhibits. 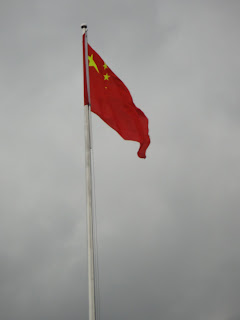 This time we also discovered the giant peace statue too, which made me feel better about the whole thing. When I visit there I am glad the was on their side in that conflict, because Chinese folk looking at me with curiosity is enough to make me a little on edge. Kerry has a great take on it; she says people look at us as a kind of reality show. They don’t pretend not to stare so we should just enjoy the attention. I guess its not considered rude to stare in China, but I still can’t get up the nerve to stare back.
We saw another pharmacy and I was able to convey that I had a cough with yellow phlegm in Chinese to the pharmacist. Shockingly, when I read the Chinese characters on the bottle I recognized two herbs that were appropriate for my cough, so I waved off their other suggestions and bought it. At home I Goggled it, translated the Chinese and was encouraged to find I had bought the equivalent of fritillaria loquat syrup with ephedra in it. This is similar to a common patent (pre-prepared herbal formulation) back home and is perfect. It was 28 yuan, which is expensive by my new standards so hopefully it will work.

The ephedra thing is interesting though. There is a lot of misunderstanding about ephedra in the U.S. Basically my take on it is that the FDA ended up banning it because energy drink and diet pill manufacturers were concentrating the active ingredient to be six to ten times as strong as in the original herb. At that strength it is dangerous and can be used to manufacture crack. In the unadulterated herbal form, ephedra it is no more dangerous than any other medicinal substance when prescribed by a competent herbalist. The real bummer is that it is one of the most effective medicines for asthma and other lung conditions. There is no good substitute so countless herbal preparations aren’t the same without it.

After the herb store, my pengyou (friends) bought fire roasted sweet potatoes from street vendors and they we hit Au Chan, the Fred Meyer of Nanjing.

Fire Roasted Sweet Potato from Street Cart
Most people were buying peanut butter and jelly, oatmeal and other familiar foods from home at this point in the trip. I was just happy the pomegranates are so cheap. If you eat pomegranates in China do you have to stay there forever? (Greek mythology reference) For dinner we walked for about an hour, trying to find a bakery that the lonely planet guide recommended. Eventually we found the right street but no bakery. Everyone was starving, so we ended up eating at a fast food chicken joint. I wasn’t too keen on it, but everyone else was pretty set on it so I got a chicken burger. Bad idea. Everyone else apparently felt fine, but that greaseburger did not sit well at all for me. Many people in the group are seeking out food that reminds them of home, but I am still excited about Chinese street food. My stomach feels better eating here since I have now adjusted. I hear that the KFC here is where foreigners go and get sick and I will not put one foot in the McDonalds. That about did me in for the evening, so I passed on the movie the group had bought from a street vendor.