Day 1: Monday September 21, 2010
First day of clinical shifts: Three other students (one from Italy) and I were assigned to Dr. Wenlei Qiao’s acupuncture shift at the military hospital 454. She speaks great English while most of the other Chinese doctors work through interpreters, so I feel fortunate. Apparently she came out of retirement to work with our group because she has a personal connection to Dr. Jin from the Oregon College of Oriental Medicine (OCOM). She has taught throughout Europe and started learning acupuncture at age 17. The shift is set up so that she interviews the patient in Chinese and gives us the salient points. We then look at the tongue and feel the pulse and she tells us the diagnosis and what acupuncture points she will use. Then she has us locate the points and put a dot of iodine on them so she can check their locations.
The OCOM students in the group are all Masters of Acupuncture and Oriental Medicine, so we have already been locating points and needling for years. We have passed four national board exams and many more at the college about every aspect of acupuncture, Oriental medicine, western medical precautions and safety.  We have logged hundreds of hours of treating patients in the intern clinic.
However, Dr Qiao is very particular about her point location. Her philosophy is to hit the point exactly and use a smaller gauge needle with less manipulation. This way it is very comfortable for the patient and also very effective. She asks us to locate several of our points a millimeter or two off from the places we learned in school. Then she has us needle the points and makes sure everything about our grip and the angle of insertion of the needle is exactly perfect. She also demonstrates her bloodletting technique, which she does on many of the patients. Most patients in the United States do not like the idea of bloodletting, but many of her patients are return cases that she has treated before. They come back because her treatments work, and because she has a gentle touch. She gets about 10 drops of blood from each point she bleeds, sometimes cupping the area to draw more congestion to the surface. She explains that by letting a few drops of blood out, the microcirculation in an area of pain or swelling is improved.
We have a shift from 8 am to 11 am and then take the afternoon break or ‘xiu xi” for three hours until 2pm. Today we had no idea where to go to eat, so we wandered near the hospital with Alberto, a student from Italy. We eventually found something that looked like noodles at a stand selling pig ear and duck feet etc. I also ate some rolled up thing that they chopped and put into a light broth. My two dishes cost 6 yuan, very cheap. It took a lot of pointing to get our food, as my Chinese is not really up to snuff. The others in our group of four speak no Chinese at all. The vendors seem to use hand signals for specific numbers. These are intuitive until you get up to six. Then I hand them a bigger bill and wait to see what they give back.
After we got food, we walked forever. It is horribly hot and humid in Nanjing, even in my skirt and tank top. Apparently even the Fu Dog statues were thirsty, because we saw one with a juice box in its mouth. 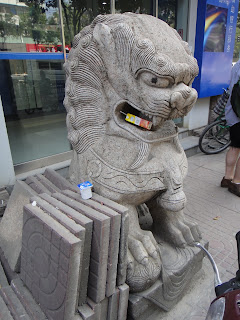 We tried to walk to a park I had seen on the drive to the shift so we could sit down. Eventually, Alberto got tired of walking and we sat on a planter hemmed in by bikes in the middle of the sidewalk. It was not clean.
After eating, we walked two more blocks and found the park. It was beautiful, with statues, trees, a lake and an amazing rock structure full of holes that looked volcanic. There were even bridges and boats on the lake and older people playing cards in a pavilion. We also saw older folks holding on to trees and doing knee bends and various other exercises. 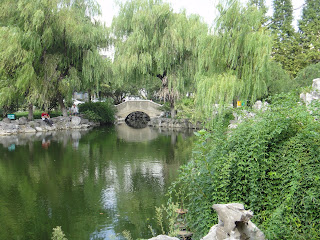 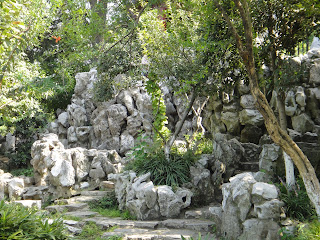 The paths were made from rocks set to make nice patterns. You can walk on them to get a kind of rough foot massage. Foot reflexology is big in China. The simple explanation is that according to Chinese medicine each part of the foot corresponds to a different organ or part of the body. Over time blood circulation in the feet stagnates and metabolic waste products build up. By promoting blood circulation in the feet, a person’s overall health is improved. 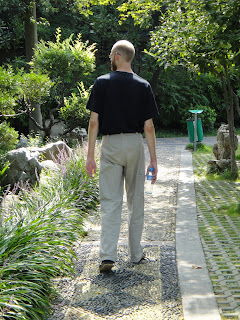 We couldn’t stay long at the park, because we had two more hours of clinic. They were much like the morning, only hotter, and I envied Dr. Qiao, who didn’t wear a shirt under her lab coat. In the United States such a gesture would definitely be misinterpreted, but the temperature was so high that the patients seemed to think nothing of it. The lab coats here have short sleeves and are much lighter weight too, so I may have to get one. It was probably 90 degrees in the clinic.
After the shift we all went to dinner and had something with a duck head in it that no one ate. I did eat a chicken or duck foot though. Apparently the collagen is good for your skin. They taste like chicken (doesn’t everything?), but they are hard to eat because they are mostly bone.
Next we bought bikes. I got mine used with a basket, rack and bell for 150 yuan. The exchange rate I got was 1 US dollar to 6.68 yuan, so that was not too bad. Most people paid up to 300 dollars for newer, nicer bikes. I offered 80 yuan for a starting price of 180 yuan and the lady actually laughed at me and walked away. Not sure if that was a bargaining tool or i
f she had really given up on me. In the end though, that bike is quite comfortable and I got a lock for free. Beth, the group leader, and Ross, another student who lived in Beijing for six months bargained for bikes for 10 people that night. That was something to see! I think Ross enjoyed haggling, he seems to find the Chinese custom of communicating at a yell endearing. They let us test drive the bikes up and down the crowded street, so you can imagine the mayhem. Dodging fruit carts, taxis, other bikes and mopeds while trying out brakes was a one of a kind thrill.
After the bike extravaganza I went to get foot reflexology. It was really painful compared to the way we do it in the U.S.. The motto here seems to be no pain no gain. The shop also up sold me to a higher price and a better massage than I wanted because they didn’t understand what I said. It was still only about five U.S. dollars for an hour though. My feet felt awesome after that, they had been kind of swollen and painful since the flights. That was enough for one day, so I went back to the hotel and slept well.