No shifts today. As the fifteenth day of the eighth month by the Chinese calendar, there is a national holiday for the autumn moon festival. This festival dates back over 3,000 years to the Shang dynasty. Our self dubbed “Chinese Father”, Dr. Wang, took the day to show us around Nanjing. It was pouring rain, which was a nice break from the heat. I did have to wring my socks out though, and could almost feel myself catching a cold.  The Nanjingians say that such a heavy rain is unusual for them in the fall; it is usually the nicest season weather-wise.
Our first stop was the Buddhist JiMing temple, which dates from the Ming dynasty and is home to nuns rather than monks. 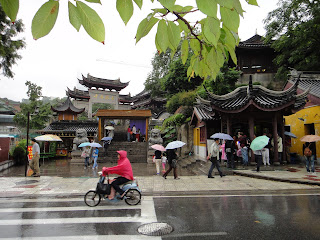 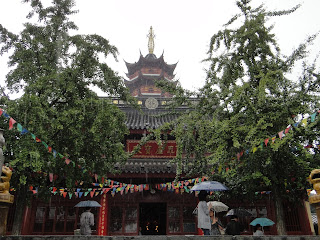 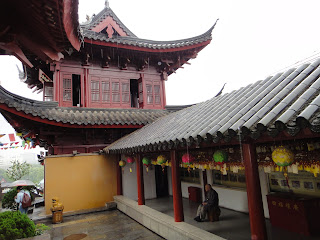 There are still practicing nuns there and we also saw a man doing some sort of ceremony. He was dressed all in black and had a few people accompanying him holding umbrellas over him. He would take one step, announce something in Chinese, kneal down with arms outstretched and palms up, put his head on the floor and then stand up and repeat the process.  I believe he went around the entire temple in this way and it seemed the umbrella holders were folks who had taken pity on him rather than people he had brought along. There were many giant statues of the Buddhas, but it is considered disrespectful to take photos. They ranged from large metal statues to brightly painted ones with fierce eyes and swords. From the top of the temple pagoda we could see the beautiful grounds and also the cranes surrounding it. Nanjing is changing every day; the amount of construction here is phenomenal. 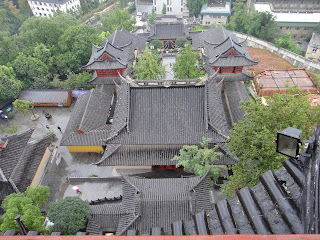 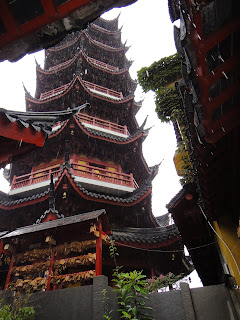 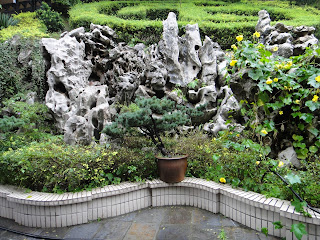 My favorite thing was actually the garbage can that looked like a dragon or maybe a ki lin. It was so cute! 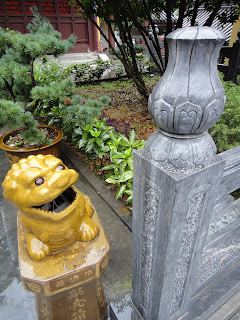 Next we went to the brocade museum. Nanjing is famous for brocade, so we saw the silk worm cacoons and the giant looms that take two people to man them. Brocade must be handmade and it takes about a day for a team of two people to weave 5 cm of cloth.  The pattern is only on one side, but as they are weaving it you can see the pattern reflected in the mirror below the machine. In the past, brocade was most commonly woven from silk and gold thread for the emperor, whose symbol is the dragon. Some local students at the museum wanted to practice their English and shyly showed us around. They pointed out other patterns that looked like the dragon but had only four claws and no tufts on their heads. These are not dragons, so people besides the emperor were permitted to wear them. 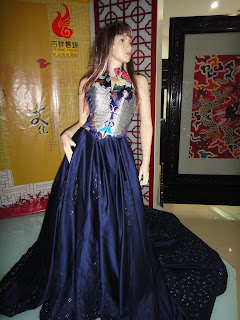 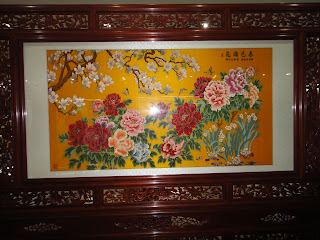 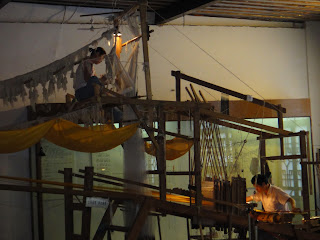 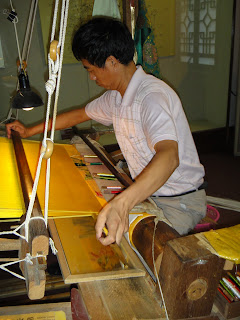 For lunch we went to an awesome Himalayan restaurant, where the food was rich but heavenly. I was freezing as my feet and clothes were wet, but the food made it all worthwhile. In the alley way next to it we saw a great sign about the Communist partay. Read the word bubble…you know you want to. 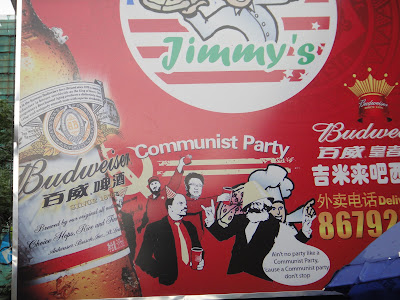 After lunch we visited Yuejiang Tower, which overlooks the Yangzi river.  This hill was the site of an instrumental battle in the ascension of the Ming dynasty. As I understand it, the first Ming Emperor, Zhu Yuanzhang, climbed to the top of the hill and looked out over the river. He then declared that he had read the river and thus read all of China, so it belonged to him. 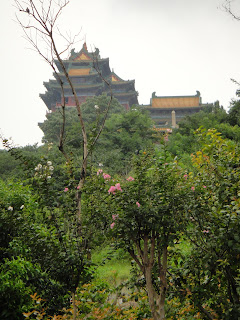 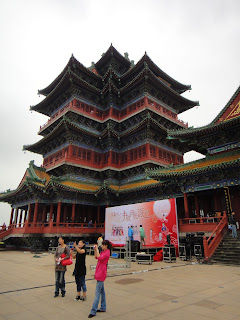 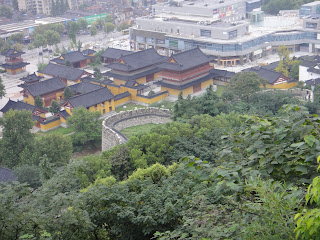 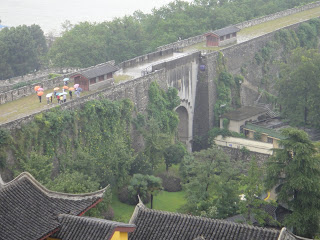 The view of the Nanjing City wall was also quite good. I guess the Chinese like their walls. There were various amusing signs such as the “lovesickness carrying pavillion”. The paths were more foot reflexology paths, this time with the flower that is Nanjing’s symbol. As we were leaving, folks were readying a stage for what looked to be a swingin autumn moon party. I was sad to miss out on the fun, but the bus was leaving and I was still wet and cold. 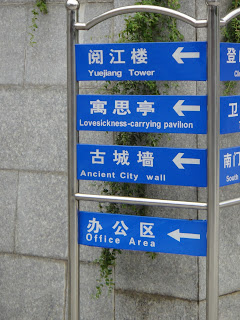 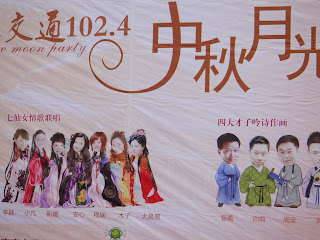