Day 4: Thursday September 24, 2010
Dr Qiao was still on holiday for the autumn moon festival today, but I didn’t want to miss out on any learning opportunities, so I attended an acupuncture shift at a different hospital. It soon became obvious that the way Dr. Qiao practiced acupuncture was very different from the way some other doctors in China practice. For one thing, this was a hospital that sterilized and reused their needles. This does not happen in the States these days, every single needle is new and in sterile packaging, and every single treatment we dispose of them afterward. I don’t believe it is common in Europe either. From a waste reduction and economic standpoint I can understand the appeal, but after seeing needles reused I have to say I am not a fan. The handles were often bent, and occasionally appeared slightly rusty. To be fair, the shafts that actually touched the skin were clean or the needles were discarded.  However, needles get duller as they are used, and these seemed to require a “different” technique from the gentle and painless one that we had been practicing with Dr. Qiao.  By “different” I mean very forceful, among other adjectives. 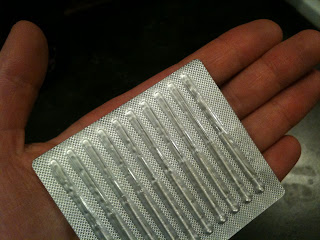 My favorite needles
I admired the doctor we were following because he could apparently get any needle of any length or quality in to the point. That much was clear, but frankly I shed no tears that I was only following him the one day, because this type of needling does not hold much appeal for me. If I need to get a larger gauge needle several inches into a point I will, but you can bet I will choose a higher quality, less painful needle. In general, patients and practitioners in China seem to care less about whether a treatment is painful than folks in the States do.
This attitude seems to apply to massage (and certainly foot reflexology) as well. Later in the day I went to get Tuina, a kind of Chinese medical massage, at a place some other students recommended. They did a full body (back, neck, legs, hands feet, head) massage for 60 yuan an hour. (Less than ten U.S. dollars, but not the cheapest I had seen.) Tuina is quickly becoming one of my favorite attractions in China. Their attack mentality was great for me, since I usually have to tell massage therapists I like more pressure. On the other hand, my calves were very tight and I was flopping like a fish because the woman working on me really got her thumbs in there. It does no good to say “oww” or even “That’s painful” in Chinese.  These are not big burly girls by any stretch, but I think you would have to specifically ask them to go lighter. Today none of us foreigners knew how to say that, so we were faced with the option of getting up off the table and running away or bearing with it. I chose to suffer in silence, and afterwards my calves felt like baby cows again instead of knots, so it was very worth it. The hunt for a good, yet cheap tuina place continues, but so far this one is nice and clean and my favorite. Some of their massage practitioners are blind and they are supposed to be really good, so I am curious. I like that the Chinese character for “foot” looks like a little man on skis, it makes it easy to find the massage and foot reflexology places. 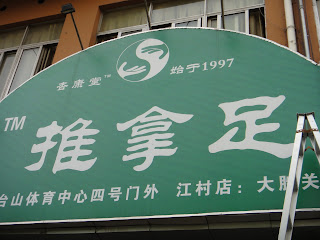 Another highlight of the day was wandering through the Confucius temple area or “Fu Zi Miao” at lunch time.  We didn’t have time to explore much but we did get a nice view of the river with canal boats tied up along it. 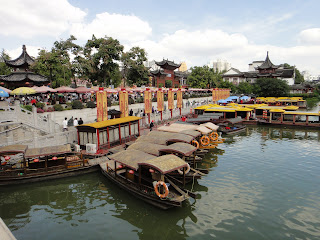 We ate at a Japanese teppanyaki  restaurant near our hotel. Service was quite slow, but I really liked their plum blossom sushi. It had bananas inside and the fish flakes on the exterior were plum flavored and pink in color. I have never had anything quite like it and found both the presentation and the flavor charming.My sushi and salmon set came long before my friends’, so their opinion of the place was considerably lower than mine. What China really needs is some food expeditors, but apparently they have such nice job security that they don’t need your business. Also there is no tipping, so no reason for staff to care how long you wait for your food. 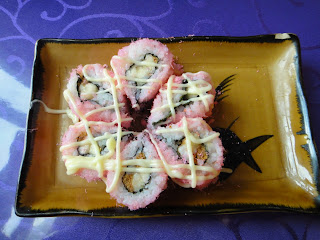 The final highlight of the day was the “elf service bank” sign. I’m not sure how they coerced Santa’s little helpers to stop making toys and work for them, but there it was. They have everything in China. 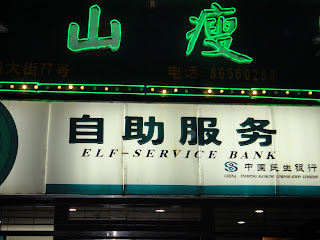